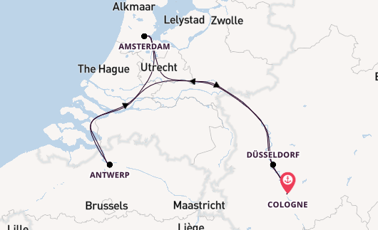 Top Reviewed
from
$979
per person
View Offer
What our customers say:: 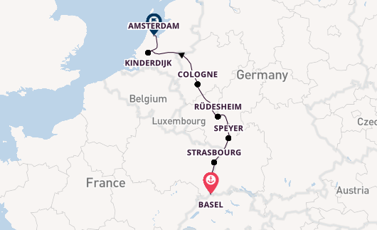 Amsterdam is a pulsating city that has it all.

The city’s main sights attract over four million visitors a year and include:

What began as a small fishing village on a river has developed into one of the biggest tourist destinations in the world. Its maritime backdrop blends effortlessly with its modern buildings. As well as its museums and canals, the distinctive laid-back atmosphere is something that can only be experienced in Amsterdam.

Visitors to the Dutch capital can choose to cruise Amsterdam as part of a river cruise or sea cruise with a wide selection of cruise lines including:

Life in Amsterdam is centred around its many canals. This widely liberal city is best explored by river as all of its most impressive sights can be seen on a cruise along the city’s canals.

Amsterdam is a fantastic port of call on cruises that also stop off at many European cities such as:

Amsterdam is very popular with tourists from all over the globe. If you would like to avoid crowds at popular sights, restaurants and shops, plan your visit for the months of:

The weather will still be enjoyable, with mild temperatures and quite a lot of the sun.