The Pride of America was the first new US-flagged ship in nearly fifty years, it was designed to pay homage to the spirit of the United States, with American themed public spaces.

Cruises on board the Pride of America

Cruise from Hawaii all year round onboard Norwegian Cruise Line's Pride of America. With balconies in over half of the staterooms, experience the spectacular ocean views as soon as you wake up in the morning. If you’re availing of the Feel Free at Sea offer, discover an amazing selection of speciality restaurants taking inspiration from all over the world. Witness twirling knives at the Japanese Habachi restaurant and taste signature French dishes at Jefferson’s Bistro.

When it comes to relaxation and “me time”, Pride of America does it right. Spend some time doing nothing at all in the Conservatory or treat yourself to an afternoon of pampering at the spa. Spend a day under the sun with the family at the Miami style South Beach Pool and maybe enjoy a drink at the ocean drive bar. In the evenings attend a show at the Hollywood theatre and enjoy some world-class entertainment.

Travelling from Honolulu via Hilo

Travelling from Honolulu via Hilo

Sailing from Honolulu with the Pride of America

Sailing from Honolulu with the Pride of America

Cruising from Honolulu via Hilo

Cruising from Honolulu via Hilo

12 nights with the Pride of America
March 2021
Hawaii,Pacific,South Pacific
from
$3,699
See all Offers 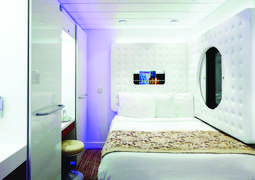 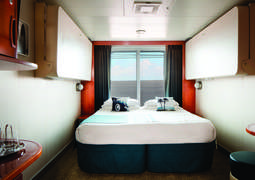 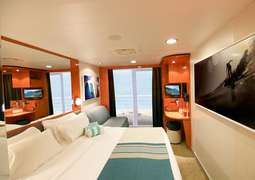 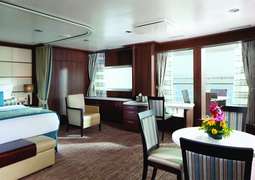 The Pride of America is the only ship in the fleet of Norwegian Cruise Line that operates under the flag of the Bahamas but under the US American flag. This has the decisive advantage of being able to anchor freely in its target area, namely the Hawaiian Islands. It is used throughout the year. The 940-strong crew also consists of one hundred percent of American citizens. The ship is one of the smaller ones of the fleet. With a length of 280 meters, a width of 32 meters and a draft of eight meters, it can accommodate up to 2138 passengers on board with double occupancy. These can choose between four different cab types; Suites, balcony cabins, outer cabins and interior cabins. The Deluxe Owner’s Suite, with its nearly 129 square meters, offers the most space and luxury. It can be occupied by a maximum of two passengers.

ENTERTAINMENT FOR EVERY TASTE

Public spaces include various options in the area of ​​dining, bars and lounges, and spa, sports and entertainment. At the Pride of America you will never get bored. The latter category offers you 24 different possibilities of leisure activities. They range from children’s activities to sports facilities to cinema and a library. The nine bars and lounges also offer partial entertainment, such as cabaret. In addition, 14 restaurants are located on the Pride. There is something for everyone, whether Italian or Japanese. In two facilities you will be provided 24 hours a day.

As already mentioned, the Pride of America operates exclusively around the Hawaiian islands. The route covers seven days and begins and ends in Honolulu, the capital of the 50th state of America. From here we continue to Maui, the second largest island in the archipelago. On day four, Hilo, the third-largest city on the island group, is driven. Kailua is another city on the largest island called Hawaii and is explored on the fifth day. The last two days will be spent on the Kaua’i Island, before returning to Honolulu by night.