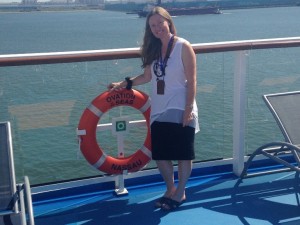 I was fortunate enough to be invited to attend the official naming ceremony of The Ovation of the Seas, Royal Caribbean’s most innovative and technology advanced Quantum class ship in Beijing, China.

The excitement and anticipation was high as we boarded the ship amongst all the fanfare and hype at the port.  From the first step on board it was WOW! WOW! WOW! Taking in 4180 passengers and spanning 18 decks, it was simply spectacular and round every corner and corridor it just got better. Being brand new, it was exceptionally sparkling and clean.  After seeing our spacious and well-appointed balcony cabin, we set off to explore. The only problem was where to go to first!

Like most cruisers we headed straight for lunch at the Windjammer Café which is a buffet style restaurant. There were many choices of hot and cold food both savoury and sweet.  Because this was a cruise with many travel agents and media on board, the ship was only at half capacity. All speciality restaurants were open for tasting, so knowing that, I saved myself a little for what was to come!

We then set off to explore the open decks with inside and outside swimming pools, spas, children’s playgrounds, various bars and seating areas. We were in awe of this amazing ship which had so much to offer.

Next was “The North Star” which is an enclosed capsule which takes you 90 meters into the air, and if you are not afraid of heights, provides an amazing view. After I recovered from my terrifying ride on the North Star, we headed off to the Flow Rider. This is surfing/boogie boarding, on a ship! Then, it was to the Skydiving, which was encased in a long cylinder with the air pushing up from the base. 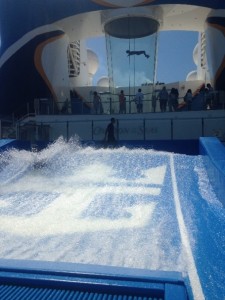 The music was pumping and the atmosphere was super charged with adrenalin.  Being the more conservative type I was quite happy to watch the thrill seekers of all ages try these out. Just round the corner is the rock climbing wall, then the entrance to Sea Plex which is the largest multi purpose indoor arena at sea.

Sea Plex changes from Bumper cars, roller skating, basketball, soccer and various game events throughout the day. Upstairs in Sea Plex is a massive Xbox set up complete with multiple mega screens and consoles, table tennis and various gaming tables. There is truly something for everyone.

After having a play at Sea Plex we made our way down through the decks to the various speciality restaurants. There are many to choose from, and obliviously, we had a taste test at them all.  They all have a cover charge and each and every one is truly special and unique.

Izumi, is Japanese themed area, with a sushi bar as well as various a la carte dishes. It is bright, vibrant and trendy. Open for lunch and dinner daily.

Kung Fu Panda Noodle House which is open from morning to late night. It has Asian snacks and noodle dishes and is popular with families.

Chops Grille Steakhouse features steak and seafood and also has the Chefs Table where you can have a 6 course meal paired with wine and is quite exclusive. This is open for dinner only. 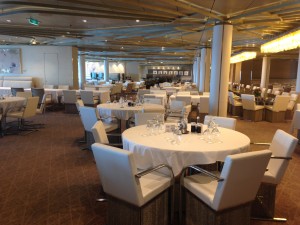 Wonderland, which was my favourite and like something out of an “Alice in Wonderland” movie set. Inside it is stunning, with an imaginative menu, which is made of invisible ink! You can enjoy the amazing experience it for lunch and dinner.

If you’re a suite guest, you can enjoy exclusive dining at Coastal Kitchen, which is a restaurant for that features light gourmet food.

There are also casual eating places throughout the ship if you just want to grab a snack, Hot Dog House, Patisserie and Coffee Shop who serve Starbucks, Promenade Café and don’t forget the ice cream stand which is conveniently at the pool area. 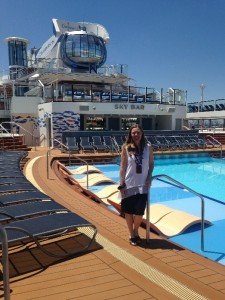 After eating our way around the ship, it was time to go back to the cabin to get ready for the big event, “The naming ceremony”. It was such an exciting experience and one I felt privileged to be at.

All the Royal Caribbean hierarchy were there and the ship was officially named and blessed by the Godmother “Fan Bingbing” who is a famous Chinese celebrity. The Chinese on board were wild with excitement and even though the ceremony was conducted in Chinese you still got caught up in the atmosphere. The ribbon was cut and the huge bottle of champagne smashed over the hull and we were on our way.

It was official, The Ovation of the Seas had been named!

Next was dinner. The Ovation does it a little differently with its main dining rooms. There are four different themed restaurants and you can choose where to eat by booking in advance or you can just turn up and they will seat you where they can. The restaurants are American Icon Grill, Chic, Silk and The Grande and each one is very different in style and menu. We ate at the American Icon where the food and service was exceptional.

The evening turned into a series of trying out the various bars including the amazing Bionic Bar, which is staffed by two robots. You can have the robot mix you one of its recommend cocktails or give it your order and it will whip it up for you. The Bionic bar is a fun place to hang out along with the disco which amps it up late into the night. 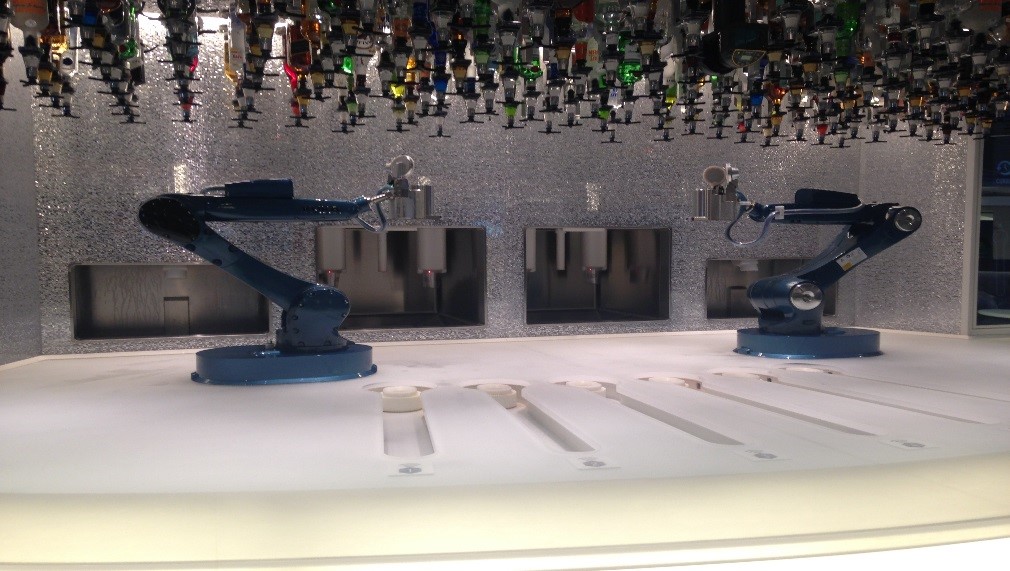 There is the large tiered theatre which shows cabaret style productions and also the Two70 which has interactive shows featuring lasers, video projections & robotic technology. I have never seen anything like it, especially at sea. If there is one thing you have to see on this ship it is a show in the Two70.

After a busy day it was time to retire back to the cabin and rest up ready for another day exploring this incredible ship. 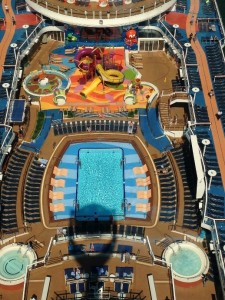 The next day was spent at the various bars, pools, casino and play areas. We only had a few days on board and wanted to do it all. There was always something happening in the Royal Esplanade which features shopping, cafes and even a pub.

We were torn where to go and what to do next. We did however pay a visit to the gym which had all the latest equipment and technology for those that feel the need to work out whilst at sea. The spa retreat was inviting and tempting and you could easily indulge yourself with the many pampering packages on offer.

Adding to this breathtaking ship are 1100 pieces of artwork which are featured throughout. There are sculptures, paintings, even a three metre screen filled with moving butterflies and a moving sculptured wall. The exceptional pieces would appeal to those who do not even consider themselves art lovers. 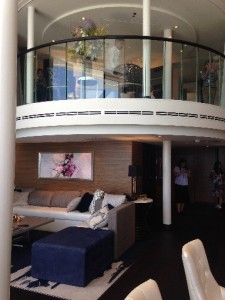 Many of the cabins were open for us to have a look at. We were lucky enough to see the loft suites including the 2 level Royal loft and Owners loft.  They are truly very special and luxuriously appointed.

The Ovation of the Seas caters for everyone, from the single studios, family suites, inside cabins which all have a virtual balcony to the top end suites. They are all very well designed, modern and tasteful. The bathrooms are larger than I expected and very stylish. The modern technology in the cabins allows you to make restaurant, spa and shore tour bookings from your cabin. Also you can keep an eye on your on-board account all from your interactive television.

Another feature is Royal IQ which is an app that you download onto your mobile which enables you to make all your bookings from your device. The high speed internet VOOM is also the fastest currently at sea which I tested out and was really impressed. 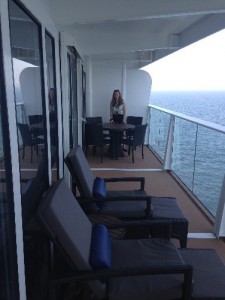 Overall my experience on the Ovation of the Seas was amazing. This is a very special ship with so much to offer. It certainly has the WOW factor and it will appeal to the young and old, families, couples and singles alike.

There is something for everyone and you can be as busy as you like or do as little as you please. It is modern and innovative and will bring something very new to the Australian cruise market when she arrives.

My short time on board was not enough and I have already booked to go back on her again when she arrives in Sydney!